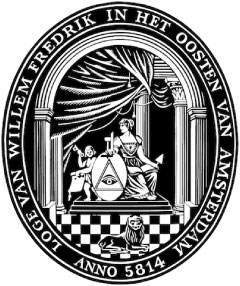 Lodge Willem Fredrik strives for a new relevance and distinction for freemasonry in the 21st century. We project the best of our rich masonic history, characterised by spirit and personal courage, onto the future. We have a strong focus on ritual performance, the ancient method to ‘know thyself’, but also endeavour to position the lodge in the centre of  contemporary society and it’s developments.

We feel meeting every single week is not of this day and age anymore, so we meet twice per month. We’ve traded the old fashioned tails for a well tailored dark suit.  We’ve dusted of our rituals, and have renewed them with a more historic and dramatic character according to Belgian tradition and with a clearer focus on personal duty of French masonry, staying true to our French roots. Our lodge organises debates and lectures on current developments and visits foreign lodges throughout Europe twice per year.

Willem Fredrik is men only and generally of higher education, but fortunately it’s members do represent a wide diversity of different lifestyles, world views and nationalities. Exceptional is the relatively large amount of members living and working abroad, and international members living and working in Amsterdam. Our lodge aims for controlled growth, we initiate a maximum of five members per year. We invite ‘free men of good standing’, also or perhaps especially with a different profile, colourful and of any creed, to contact us. Our lodge has almost doubled in size to 50 members over the past decade. We’ve welcomed exceptional new members, but more importantly: we’ve hardly lost anyone along the way.

Freemasonry was once a powerhouse. :Lodge Willem Fredrik wants to revive the glory days of Freemasonry, but works hard at forming a lodge that is also relevant in the 21st century.